Balazs Wellisch, CEO According to neuroscience, a person’s anticipation of rewards triggers the release of dopamine, a neurotransmitter that reinforces behaviors leading to visible benefits. The more unpredictable the rewards are, the more dopamine is released. Balazs Wellisch, CEO of GameIQ, puts the concept into perspective: "The concept of variable rewards is what keeps people sitting in front slot machines in Las Vegas casinos; the randomness of the outcome heightens the fun and excitement we all seem to crave so much." The sales gamification experts at Carlsbad, CA-based GameIQ employ the engaging psychology of variable rewards to attract new customers and drive sales for their clientele. Specifically, the firm offers a robust “rewards and loyalty platform” that features a combination of real-time cash rewards and gamification technology. "Variable reward is a new concept that we are bringing into this space," as Wellisch explains further.

Annually, it is reported that retailers and restaurant owners pour US $ 77 billion into promotions and incentives. The significant problems plaguing the current reward ecosystem are the unfamiliar waters of the digital world, a lack of real-time control over promotions, and guaranteed protection for brand reputation and profit margins. This is where GameIQ is carving a niche for itself. The company's platform drives sales, along with prospects, by reaching customers through their mobile devices, engaging them and utilizing their social networks to grow the merchant’s customer base through organic word-of-mouth marketing. It allows the clients to influence the buying process and enhance the way consumers shop permanently.

The company's platform drives sales, along with prospects, by reaching customers through their mobile devices, engaging them and utilizing their social networks to grow the merchant’s customer base through organic word-of-mouth marketing

"The variable rewards strategy combines cash rewards with a pure gamification experience to motivate loyalty and create committed users," elucidates Wellsch. In addition, the pay-for-performance initiative by GameIQ guarantees sales and positive ROI for merchants. Using this strategy, the merchant can set their terms to protect their margins and brand identity.

In a retail space saturated with antiquated coupons, groupons, discount, and electronic punch cards, the GameIQ platform is a refreshing alternative for both merchants and their customers. Designed to be user-friendly and intuitive, the GameIQ platform allows clients to control their on-demand promotions in real-time. Furthermore, the platform does not require any hardware installations and giving clients the freedom of simultaneously working with other reward programs and sales processes. It takes only a few minutes for merchants offering apparel and accessories, general merchandise, food, and drinks, or services, to sign up and be listed in the SaaS-based GameIQ system. Through the power of the GameIQ platform, commercial transactions originating from any source—including mobile apps, e-commerce stores, and point of sale terminals can flow simultaneously and be gamified. Their listings appear on GameIQ’s customer-facing cash back rewards app called 'Spindy'—that allows users to browse through a list of participating merchants in their neighbourhood.

Following a purchase at a listed store, customers can then log onto the Spindy app and upload a snapshot of their receipt as a "proof of purchase."

Equipped with Optical Character Reader (OCR) technology, Spindy extracts information from each receipt and creates a digital signature to validate it and approve or decline the payment of rewards. Next, customers can spin a wheel to determine the amount of their reward. With cash back rewards ranging from 1 to 100 percent of the amount spent, the customer experiences the instant gratification of playing a game and winning cash that gets transferred straight to their bank account.

“All rewards are equally important. Bigger rewards create a greater buzz because people are intrinsically moved to want to share that experience on social media,” quips Wellisch. "Spindy is a powerful promotional tool, helping merchants to reach a wider audience.” Meanwhile, smaller rewards keep people coming back for more purchases because they crave spinning the wheel again to see if they can win a bigger reward. “When people win rewards through GameIQ, they celebrate and congratulate each other with virtual high-fives. You don't create that kind of experience with coupons or punch cards.” GameIQ’s pay-per-performance model helps businesses reduce their customer cost of acquisition. It is not until an actual sale is made that a small transaction fee applies, instead of a monthly fee or a term commitment. Additionally, the platform helps businesses leverage the virtual social world by allowing users to organize themselves into teams and compete against each other for lucrative perks and recognition.

With the reward industry populated by several established players, GameIQ’s strategy was to stay ahead of the curve with a clear-cut vision for the future. The company faced significant challenges while creating its vision of an ideal interaction between consumers and businesses--an increasingly fragmented base of consumers who connect with merchants through multiple channels. GameIQ's unique a strategy in an era where traditional reward systems rely on complex and outdated ways of appealing to consumers and created a simplified approach to powerfully influence buying behavior, reward it, and increase consumer engagement to drive sales.

Moving forward, GameIQ plans to expand nationwide geographically and is currently engaged in the process of creating structured relationships with large product chains in the restaurant and retail space. GameIQ also anticipates online expansion, integration with POS applications, and collaboration with large retailers who want to boost sales, leveraging the power of variable rewards from any source, anytime and anywhere.

Description
GameIQ develops and provides a reward and loyalty platform that combines real-time promotions with the gamification technology to engage customers and grow businesses. The company serves apparel and accessory markets, general merchandise sectors, food and drink places, and service related businesses. GameIQ was incorporated in 2014 and is based in Carlsbad, California. Furthermore, the GameIQ platform lets you customized data set, mobile notifications and local advertising activations 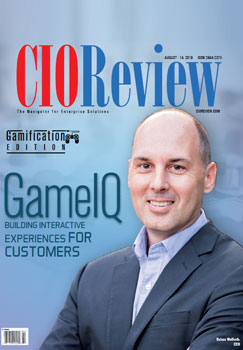